Are Cambridge's' best secrets seen from the river?

Pleasure punting is believed to have been introduced around 1902 – 1904 and has ever since been one of the best ways to view the historic city of Cambridge.

The rivalry between Oxford and Cambridge Students even extends to the correct way in which to move the punt. In Cambridge you would stand on the till and punt with the open end forward whereas in Oxford they stand inside the boat and punt with the till forward. This tradition is so strongly upheld that the till end is often called “the Cambridge End” and the other as “the Oxford End”

There are believed to be more punts on the River Cam than on any other river in England. This is mainly due to the spectacular views of some of Cambridge’s most famous buildings, including Kings College, Trinity College, along with many impressive stone built bridges & and just some of Cambridge’s green areas such as Jesus Green and Midsummer Common.

Why not include some of these lovely views and areas with your home by renting a property on the river such as Water View, Riverside; 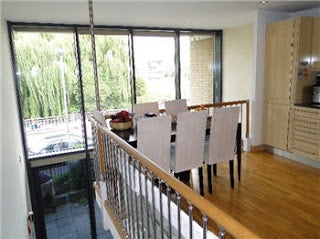 A Two Bedroom Fully Furnished Executive Duplex Apartment Overlooking The River Cam. This property is in excellent condition, and is very modern & airy. The property includes a patio garden, kitchen/diner on the mezzanine floor, two bathrooms and allocated parking.

This property is on the market for £1750pcm through Belvoir Lettings Agents Cambridge and comes fully furnished. For further information on this property or other available properties visit www.belvoir.co.uk/Cambridge or call on 01223 352225.