Despite containing urban and industrial areas, Wirral still has picturesque villages, sandy beaches, large areas of land owned by the National Trust as well as views across the two estuaries and out into the Irish Sea. Among the areas of open land are Bidston Hill, Caldy Hill, Eastham Country Park, including the Victorian Pleasure Gardens, Hilbre Island, North Wirral Coastal Park, Thurstaston Common and Thor’s Stone and the Wirral Way. Ness Botanical Gardens are part of the University of Liverpool and have won many awards. The visitor centre at RSPB Burton Mere Wetlands provides birdwatching facilities in the Dee Estuary nature reserve.

Places of architectural interest include Hamilton Square and Port Sunlight. The view of the buildings on Liverpool’s Pier Head when crossing on the Mersey Ferry is famous. Many villages of Wirral such as Burton also well preserved with their characteristic red sandstone buildings and walls. The old port of Parkgate also attracts many visitors. The arts are well represented by the Lady Lever Art Gallery at Port Sunlight and the Williamson Art Gallery in Birkenhead. The historical sites include Birkenhead Priory, Leasowe Lighthouse, Hadlow Road railway station and the buildings and ancient carvings on Bidston Hill.

Wirral has hosted a variety of different films and television programmes. Chariots of Fire was filmed at various locations on the Wirral including the Oval Sports Centre, Bebington and the Woodside Ferry Terminal while the Ealing comedy, “The Magnet” (1950), was filmed in Wallasey and New Brighton.

More recently, The 51st State was partly filmed around the docks in Birkenhead and most recently Awaydays, based on a novel of the same name by Kevin Sampson, was filmed extensively in Wirral.

The Queensway Tunnel in Birkenhead is also featured in the Harry Potter film, Harry Potter and the Deathly Hallows – Part 1 during the scene where Harry and Hagrid escape on a flying motorcycle and pass through the tunnel. The scene was filmed while the tunnel was closed for repairs.

In television, sitcom Watching, produced by Granada Television between 1987 and 1993, was partly set and filmed at various Wirral locations, particularly Meols. More recently, Mike Bassett: Manager, starring Ricky Tomlinson was a follow-up to the film Mike Bassett: England Manager, and featured a fictional football club called Wirral County, a parody of Tranmere Rovers, who Bassett (Tomlinson) managed after being sacked from the England job. It is also believed that the Lime Pictures production Hollyoaks films occasionally, on location, in Wirral. 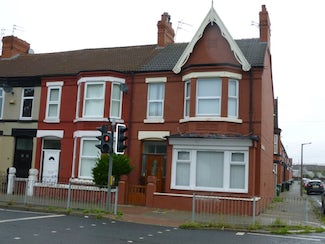