Doncaster has exceptional communication links, by Road, Rail and Air.

Because of it's outstanding infrastructure along with its number one asset, its people, Doncaster has attracted over £1 Billion of investment since the year 2000, supporting the creation of over 16,000 new jobs.

A new University Technical College is due to open in September 2021. Doncaster UTC will provide an inspiring environment where young people can develop and reach their full potential. This will equip young people with the education and qualifications required for future success and will create pathways into university or higher levels of education and to the most significant areas of growth in employment, locally, nationally and internationally.

Amazon plans to open its 4th distribution centre in Doncaster.

An exciting new six screen cinema and five restaurant development is lined up for Doncaster's Civic and Cultural Quarter. Located next to the Cast theatre it will frame Sir Nigel Gresley Square and provide additional attractions to draw people into the Waterdale area. The plan is part of the overarching Urban Centre Masterplan which is rejuvenating Doncaster's town centre.

The impressive cinema and restaurant development is an important piece of the jigsaw in the Civic and Cultural Quarter.

The Civic and Cultural Quarter has become an attractive destination in recent years with the creation of Sir Nigel Gresley Square, the new Civic Offices, the CAST performance venue, and the £15 million investment in the New Central Library and Museum.

The new cinema complex will add to the growing number of attractions in the area. It will also create over 100 jobs.

360 Degrees Media - 90-acre site, creating a diverse range of new businesses around the UK and US Film, TV and Digital industries. The site is a hub for the creative and digital industries in South Yorkshire and nationally over the next 3 – 5 years (2019 -2024).

iPort rail Doncaster wins rail industry innovation award. The site is linked to Junction 3 (Doncaster) of the M18 via the Great Yorkshire Way. The A1, M1 and Doncaster Sheffield Airport are all in easy reach.

iPort rail in Doncaster has won the Major Project of the Year category at the 2019 Rail Industry Innovation Awards.

This is the first inland rail freight terminal to be open and operational for a decade. The first rail service started in September 2019, a week after iPort Rail’s formal opening by HRH The Princess Royal. Since then, routes to and from Felixstowe have started along with a third service to and from Teesport.

87% of the mainland UK population is located within a four-hour drive time. The East Coast ports are less than one hour away, and the country’s deep-water ports can all be reached in around seven hours.

“This is a state-of-the-art facility, capable of handling the UK’s longest trains, and a central part of iPort’s success … with the logistics sector thriving, rail freight is rightly getting more attention, not least because each freight train journey takes at least 70 HGVs off our road network with many fewer harmful emissions.” said Michael Hughes, CEO of Verdion.

The Hilton Garden Hotel - Doncaster Racecourse. The 154-room hotel is located within the grounds of one of the UK's most historic horse racing venues. The hotel offers guests extensive views over the track and opened in September 2018, just in time for the St. Ledger Festival 2018!

The new Hilton Garden Hotel provides guests with an ideal setting to view the sporting action and enjoy the excellent hospitality. The hotel features associated parking and landscaping, enhancing the image of the racecourse and provides a beautiful surround to the hotel.

ARC's racing and property director, Stephen Higgins, said: "Doncaster Racecourse is steeped in heritage and plays an important role in the local community; this was an exciting project which now starts a new era for the racecourse.

Doncaster Council agreed to begin construction on the high quality cinema and restaurant development. The development is one of the final pieces of the jigsaw to redevelop the Cultural and Civic Quarter of the town and fulfill the vision outlined in the Urban Centre Master plan. It is planned for the new development to be open in spring 2020. The council are investing more than £10 million of their Investment and Modernisation Fund to bring the project to fruition.

iPort is a Strategic Rail Freight Interchange (SRFI) which is delivering more than six million sq. ft. (570,000 sq. m) of Grade A logistics warehousing linked with a high specification rail freight inter-modal container facility. This will provide rail freight services to all major UK ports and the Channel Tunnel.

Logistics developer and investor Verdion, with backing from its funding partner the Healthcare of Ontario Pension Plan (HOOPP), is developing the scheme on a 700 acre (283 hectare) site. Amazon, CEVA, Fellowes and Lidl have all been confirmed as tenants.

AMAZON 'S Third Doncaster fulfillment centre is now open at this location creating over 500 new jobs. “We already have two fulfillment centres in Doncaster so know from experience that there is strong talent in the region who would be well suited to working for Amazon,” said John Tagawa, Amazon’s vice president of UK operations.

The iPort development was made possible by the Great Yorkshire Way. Phase one providing a new highway from the M18 at junction three to Doncaster Sheffield Airport with links into Rossington and the iPort development. Work on phase two of Great Yorkshire Way began June 2017. This will complete the high quality direct link from Doncaster Sheffield Airport to the M18 and also White Rose Way and Lakeside, the site of the new National College for High Speed Rail.

The new employer-led college is the largest of five new national colleges created by Government to ensure British workers can learn world-class skills. The development has been supported by Doncaster Council who helped to secure funding for the scheme as well as being involved with the design and construction of the college.

At full capacity, the college will train 1,200 learners a year.

The National College for High-Speed Rail is dedicated to solving the engineering, design, planning, manufacturing and construction skills gap that Britain faces as it looks to invest billions of pounds in modernising Britain’s rail network and wider transport infrastructure.

Over the next five years, it is estimated that businesses in Britain will need 182,000 new engineers every year. Right now, it is falling short by 69,000 engineers a year. The rail industry in particular faces even further skills shortages, with one in five rail engineers currently aged over-55. With Britain’s move into high-speed rail and HS2 alone set to create 25,000 new jobs including 2,000 apprenticeships, careers in this industry are set to become more and more sought after.

The campus on Carolina Way in Doncaster has been equipped with the very latest in cutting-edge technology, including virtual reality training on board a Eurostar power car, an augmented reality classroom, and a dedicated BIM (building information modelling) cave.

The college will play a key role in generating the workforce of the future who will design and build the UK’s new high-speed rail network and future infrastructure projects. It has recently created the UK’s first Certificate of Higher Education (CHE) in High-Speed Rail and Infrastructure, which people in Doncaster can now apply for.

Doncaster’s newest provider of post-16 education, New College Doncaster, has had an impressive first year’s enrolment, with 470 students starting at the college.

“It’s a record first-year intake for schools and colleges that have opened under the government’s free schools programme,” said Brendon Fletcher, New College Doncaster’s Principal, “and it makes us the largest provider of A-Levels and Level 3 BTEC's in the area.”

“Our college is built on a set of systems and strategies that have a track record of success. Along with the breadth of subjects on offer and a purpose built site, their track record is part of what makes New College Doncaster an attractive place for young people to study. The young adult environment generated by only having 16-19 year-old students helps create a very different culture to that within a school environment.” "Parents and students will have an opportunity to get a closer look at the college early in 2018, when the college’s Open Day is held on Saturday January 27th. “We know it will be a fantastic opportunity for parents and students to see what we’ve established in our first year,” added Brendon, “to meet teachers and some of our current students, to see the excellent range of facilities we have on offer and to start exploring the subjects they can study with us.”

Any student who does want to join the college for September 2018 can apply online at www.ncdoncaster.ac.uk/apply by the deadline of Friday 2 March 2018. Although students can apply after this date, priority will be given to students who applied before the deadline if courses are oversubscribed.

Half a million extra passengers a year can take off from Doncaster Sheffield airport as a major airline launches eight new routes.

The announcement that Flybe will deliver up to 44 extra flights per week from the airport – from March 2016 has been hailed by Steve Gill, managing director of Doncaster Sheffield Airport, as ‘transformational’ for the region.

The Yorkshire wildlife park - The Park has over 400 animals and over 70 different species.

A regional centre of excellence for the conservation of biodiversity globally and locally that is sustainable both for the environment and the business. To promote a wider understanding of the natural world and inspire generations to support and protect the world around them.

April 2011 - “Crime in Doncaster is at its lowest for nearly 40 years!” Chief Constable Med Hughes of South Yorkshire Police said, “this is great news for Doncaster and a testament to the hard work of the men and women of the county’s force.

Other recent investment in Doncaster:

The Doncaster Race Course, home to the world-famous St Leger, the fifth and final Classic of the British Flat racing season. The £55 million re-development includes an Exhibition Centre, Top Class Corporate Hospitality facilities, along with additional Race Day Facilities (Restaurants, Bars & Cafe Areas.) The first stage was completed in August 2007. The second phase will include a four-star hotel.

Doncaster Education City, the first stage opened in September 2006. The first campus is the exciting new £65m Waterfront development in the centre of Doncaster. The Hub, is home to some of the best educational facilities in the United Kingdom. The Hub includes state-of-the-art IT facilities, a 100-seat lecture theatre, a 200-seat drama studio and a massive Learning Resource Centre.

The following major companies have based their UK regional or national distribution centres in Doncaster:

Many national companies have set up call centres in Doncaster including, B.T., Direct Line, E.W.S., UKI Partnerships and the R.B.S.

In addition, all of the following companies are building New Housing Developments in Doncaster 2017 – 2018

This recent development in Doncaster has created many great investment opportunities! 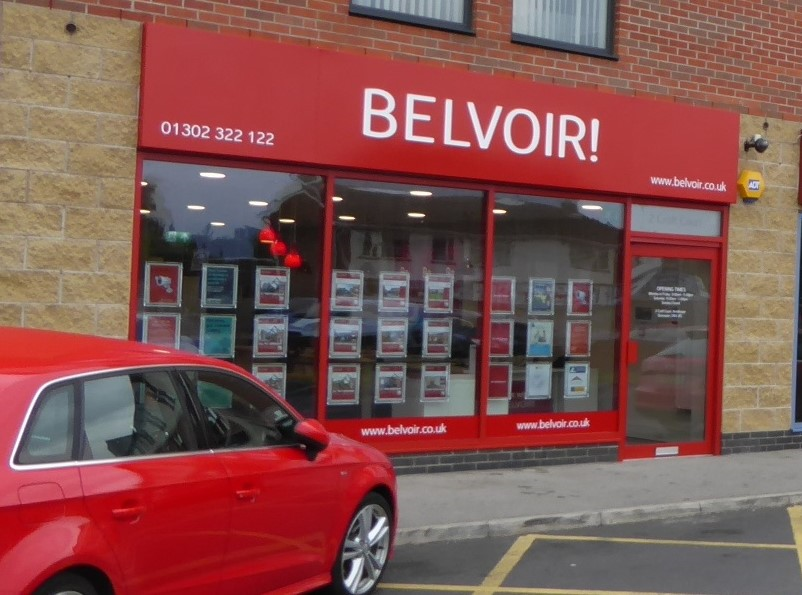