Belvoir Telford are both nationally and regionally recognised for high quality sales and letting projects. Belvoir Property Management PLC, its franchisor, is supportive of this approach to PRS within the Midlands and sees outstanding growth as identified in the sector.

A recent study by Herriot Watt University calculated by researchers and that Britain has 4 million too few homes and includes young adults still living at their parents homes. From 2006 to 2016 the number of 20 – 34 year-olds living with parents rose from 28pc to 3.4 million.

Successive Governments have failed to build the numbers of new homes, with only 141,000 new homes built each year from 2010 - 2015. The present Government have a target of 300,000 a year but will Generation Rent want to buy or continue to rent providing the flexibility and speed to move as required? Herriot Watt researchers say 340,000 new homes are needed every year until 2031

New detailed figures from the English Housing Survey show that nearly 50% of 25 to 34 year olds now live in the Private Rental Sector (PRS). Those in their late twenties and early thirties are still tenants which is up from 24% in 2006.

Building on behalf of local authorities for subsidised low-income family housing has collapsed from more than 100,000 a year in the Seventies to almost nothing today.

he PRS Report at Annex A should be referred to in order to examine yield potential within Secondary Towns and Cities in the Midlands.

The British Property Federation outlines that the PRS sector alone will require over 225,000 new homes a year to 2025 creating the opportunity for large investors to enter this market sector. 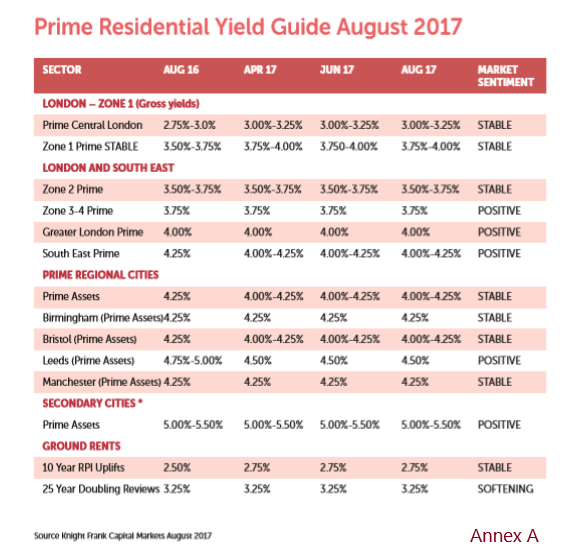 Price Waterhouse Coopers (PWC) residential research estimates that there will be 7.2million households in private rented accommodation by 2025 compared to 5.4 million today, a 33% increase in seven years.

PRS in England is anticipated to grow further to represent one in four households by 2021.

The majority of PRS investors are planning to hold their housing sector assets for longer than ten years, underlining their long-term commitment to this asset class across the UK.

*SECONDARY CITIES Within the Belvoir PRS Midlands investment plans there are a number of high growth, good quality areas that have been identified with two national builders. These regions will be targeting the yield guide above.

Belvoir PLC has been calling for regulation for over ten years and have been avid supporters of self-regulation and worked closely with the Safeagent Scheme (Safeagent) for many years. Market compliance within the company is considered excellent with central office training ensuring all Belvoir offices and staff will meet the requirements for new regulations.

Regulatory and tax changes within the last three years have altered the dynamic of this sector, reducing its attractiveness to amateur landlords and increasing the tax bills of these investors. Healthy returns are however still possible for small investors.

Government announce that Client Money Protection (CMP) will come into force before a ban on tenant fees which is anticipated mid 2019 requiring all agents to adopt this policy which is already a feature of industry compliance for Belvoir.

Legislation going through parliament on the banning of tenant fees is likely to lead to increased rents and a consolidation in the letting agent sector with businesses potentially closing and thereby giving opportunity to larger agencies, such as Belvoir with the expertise and digital skills, to provide full and compliant management.

Belvoir both nationally and regionally in the Midlands continue to experience excellent growth. The Belvoir sales team in Telford managed by Nick Evans has agreed ongoing working relationships with two major house builders to establish the PRS opportunity across a selection of new build schemes ranging in size from 500 to 1,500 housing units across keys towns in the Midlands.

A specific site in Telford has now been highlighted as being suitable for a PRS scheme. Our client controls the site by way of a long-term option and the site has the ability to deliver circa 170 units and the flexibility to tailor house types to meet perceived demand. The development can be phased with an initial tranche of 50 units being built and made available for acquisition.

Belvoir Telford have undertaken research on rental income and appropriate housing mix gathered over seven years of operating within the sector in the Telford area. We have been instructed to source a suitable investor to purchase the first tranche of homes.

Sigma Capital have recently constructed and are successfully letting a scheme of 78 two, three and four bedroom houses for the PRS sector in Telford and our research shows that demand has been strong, driven by strong fundamentals (see section on economic information).

Department for International Trade (DIT) confirmed Telford and Wrekin’s place as a foreign investment heavyweight with over £114 million investment during 2016/17. Comprising of 12 investments from a range of businesses spanning digital, advanced manufacturing and the MOD military logistics hub. Telford has enjoyed a staggering seven-fold increase compared to 2015/16, where Foreign Direct Investments (FDI) totalled over £14.5 million with brand names such as Ricoh, Denso and Cap Gemini all investing in the area.

The Land Deal has proved instrumental in helping the region to secure record levels of inward investment, notably from multi-million pound investment from Magna International, a supplier of casting to Jaguar land Rover. Open in Spring 2018 creating another 300 jobs and is one of the biggest new overseas investments in the UK in the last 10 years.

Investment decisions by forward thinking companies to invest in Telford and its people, is a testament to the hugely skilled workforce, its close proximity to the Midland’s thriving automotive industry, its excellent infrastructure and transport network.

The area boasts two Universities and the new Telford college providing a strong base to build the skills of young people for local employment, which in turn requires new housing building and investment.

Telford’s unemployment rate is only 4.7%, lower than the West Midlands at 5.2%.

The British Property Federation (BPF) states that the Private Rented Sector (PRS) will require 225,000 new homes each year to 2025.
Price Waterhouse Cooper (PWC) residential research estimates that 7.2 million households will be in Private Rented Homes by 2025 compared to 5.4 million today, a 33% increase in 7 years.
The PRS sector offers stable long-term income with the opportunity for rental growth
The Midlands offers opportunities in good quality secondary towns and cities for PRS.
Knight Frank recent PRS briefing update and data from August 2017 highlights the sector potential which shows gross yields in Birmingham at 4.25%.
Secondary Regional Cities within the Midlands are identified within the market segment as positive investment, see Knight Frank Capital Markets at Annex A targeting 5% gross yields.
Potential to purchase new build homes with low asset management costs in the early years.
One of the many advantages of entering the PRS market now is the lack of development in recent years, offering the potential to establish dominance and attract tenants from older existing housing stock, which is often outmoded and bettered by new, purpose built PRS initiatives.
Belvoir project with properties professionally managed by award winning specialist letting agents.  Industry leading marketing, compliance and legal expertise within The Property Ombudsman’s regulatory requirements.
The Belvoir PRS initial investment plan has identified build to rent opportunities within key growth towns and cities in the Midlands.
A Telford scheme of 150 plots with a home design mix of apartments and 2, 3 and 4 bedroom houses is available with the opportunity to phase any acquisition with an initial purchase of circa 50 homes, see Annex B. The usual building warranties will be provided. 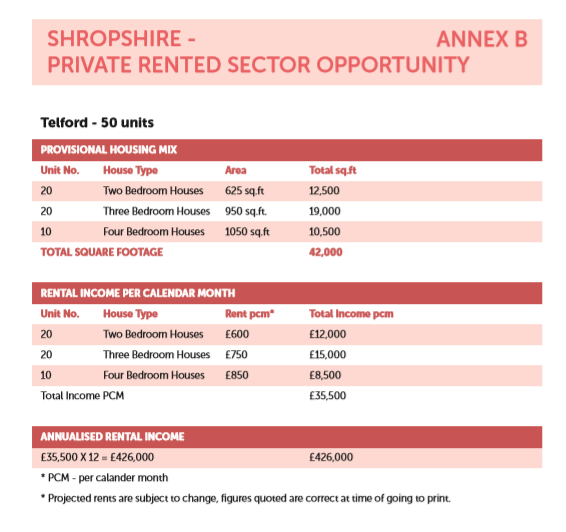 A new housing scheme breathing new life into a brownfield site in the heart of Wellington has been celebrated today with an official event marking its completion.

NEXT STEPS - Contact Simon or Nick for and informal chat

Initial discussions are being planned for second half of 2018 with selected investors, contact Simon or Nick by clicking on either image below or call direct to discuss in person.