The Nottingham Theatre Royal’s diverse programme of events including internationally renowned orchestras, ballet, opera and touring drama alongside West End musicals, family shows, stand-up comedy and rock & pop music- has arguably made it one of the best venues in Nottingham.

But what is the history behind this glorious building that sits on upper parliament street?

Back in the 1860’s when the lace industry in Nottingham was booming, local lace factory owners John and William Lambert decided that they wanted to give something back to the city of Nottingham - after all, it was the city than had given them their riches!

At the time, the area where the theatre is now located, just off what is now Market Street (hey, that’s where our office is!) was actually quite run down. It was known by the name ‘Sheep lane’ as you can probably guess, the purpose of sheep lane was to guide sheep to the market square. However, it was a tremendously steep and narrow alley, covered in slippery cobbles and surrounded by rickety and neglected buildings.

These issues were addressed by both the council and the Lambert’s and the conclusion was drawn to demolish Sheep lane and rebuild the area so that it would now boast wider streets and make way for new buildings that fitted in with the increasing prosperity of Nottingham.

It was well known theatre architect, C. J. Phipps who designed the theatre – the second ever in his portfolio, he would then go on to design many more across the UK, earning himself a brilliant reputation.

However, only five years after the theatre first opened, Phipps was called back in to alter his original auditorium, by replacing the pillars either side of the proscenium, which were considered as ‘huge and ugly’, with lighter, more elegant ones, which also made the stage a little wider and the view from the sides of the auditorium better. 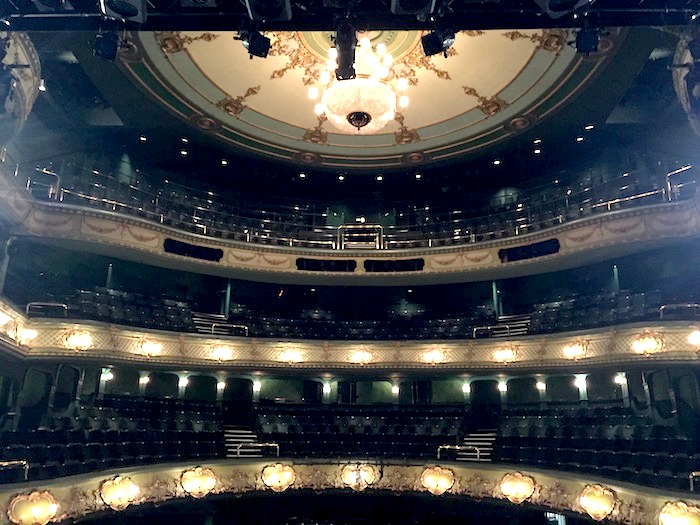 Even more changes would ensue in 1897, only this time it was another renowned Theatre Architect, called Frank Matcham who was to take responsibility for these.  The works included creating new dressing rooms and refashioning the auditorium.

Matcham pioneered the use of cantilevered steel in his designs and patented his design. This allowed balconies to be built without the use of supporting pillars; which had characterised the work of the previous generation of theatre architects, such as Phipps.

However, some years after, in 1977, the council attempted to return the Theatre back to the original design by Phipps, although this came with a varying degrees of success and this was generally thought to have been a mistake as it destroyed much of Matcham's later reconstruction of the auditorium in the process.

In 1978, the Theatre Royal was officially re-opened by princess Anne, following a £5 million refurbishment, boasting a green and gold 1,186-seat auditorium and remodelled foyers.

In 1962, Agatha Christie opened The Mousetrap at the Theatre Royal Nottingham. Little did anyone know that this production would actually become the longest-running play in theatre history!

Today, the timeless beauty of Nottingham’s Theatre Royal continues to ‘wow’ and it remains a vital and much-cherished part of our community, well loved by locals and tourists alike.