It’s not often you view a house online and it grabs your attention enough that you decide to read into the history. That’s what happened to me last year whilst scrolling through Right Move when I stumbled across a semi-detached three bedroom house up for sale on the Willow Estate, with an asking price of £550,000. I didn’t think much of it at first, until I looked at the photos and noticed its charming vintage appearance, which peaked my interest. After a google search, I’d seen a lot of news outlets had already picked up on the Art Deco property and I decided to indulge in its captivating past.

The house was built in 1934 and was up for a price of £350 (which back then wasn’t considered a small amount like it is now). 1934 was the year of the housing boom in London which saw more than 80,000 homes go up. This was also a year where Art Deco influences were at an all-time high, most homes had ‘bold geometric shapes, rich colours and lavish ornamentation’ and the ‘architecture of this period was renowned for its bold and sharp colours’ as described by the Daily Mail and Homes&Property.co.uk. 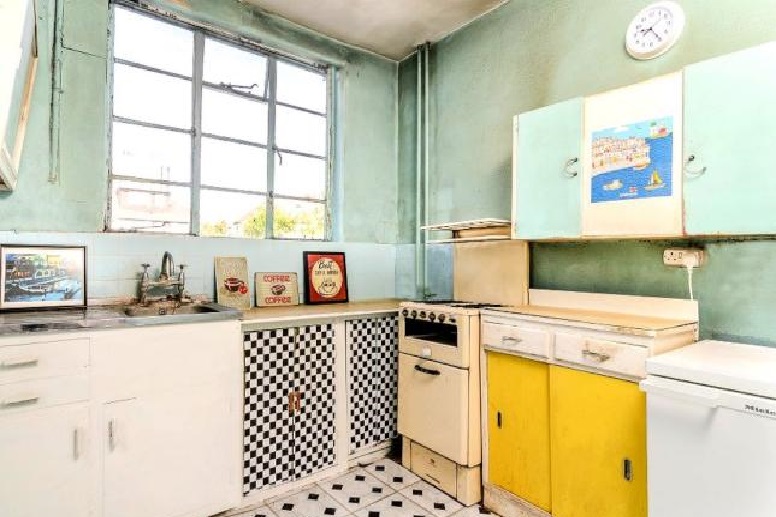 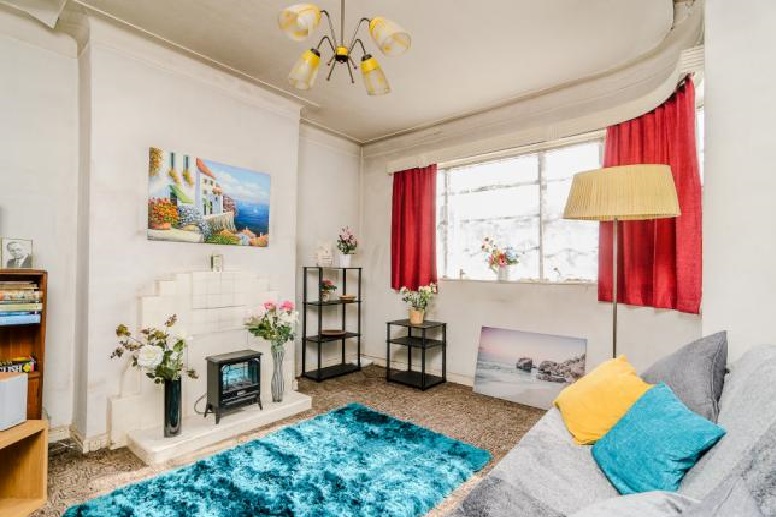 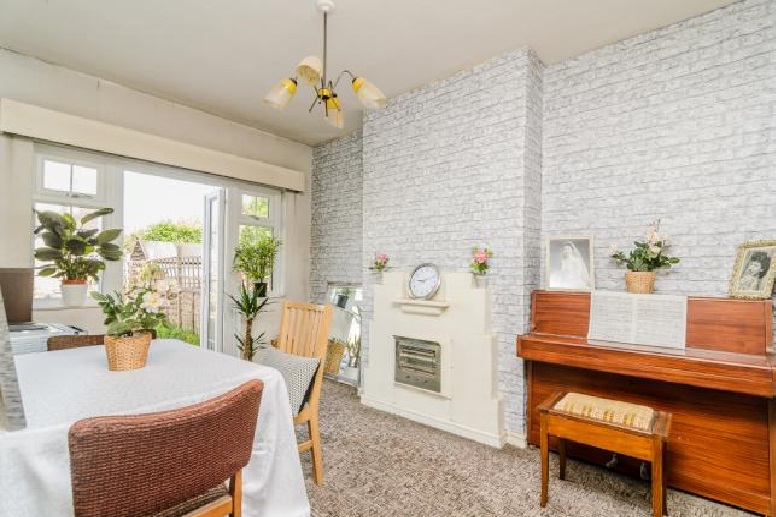 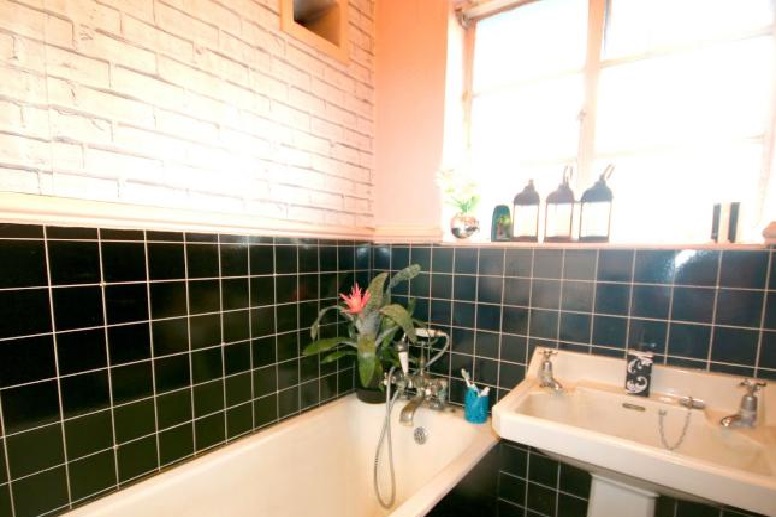 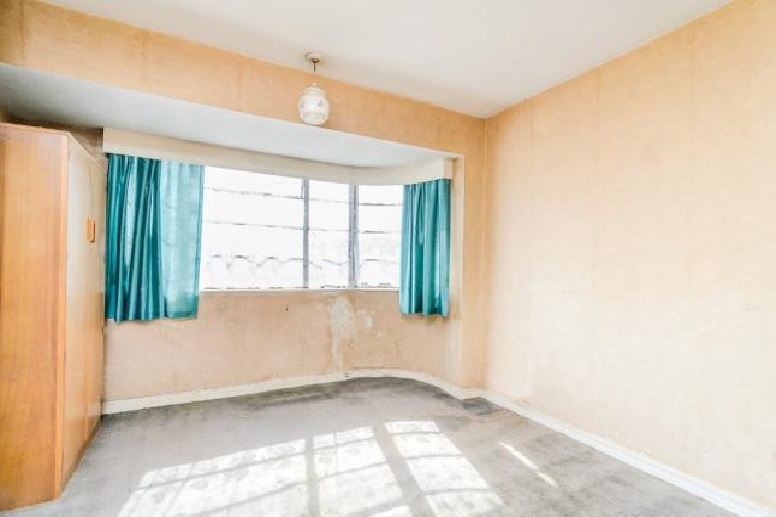 This was certainly something the owner had wanted to communicate with the bright blue accents across the exterior, the checker board cupboard doors and bright yellow cabinets that reside in the now outdated handmade kitchen. A few of the art deco/vintage features were in fact added much more recently by the owner (the cupboard doors and black and white floor tiles for example), who wanted to stage the rooms with a sprinkling of vintage charm in a bid to sell the property. However, the time capsule full of nostalgia still held a multitude of its original features, and many appeared virtually untouched.

In terms of layout, the house boasts a good size living room and dining room, with some fold away doors which allow the downstairs to become open plan. The kitchen is definitely not large but not so small that it becomes inefficient in a family home.

Upstairs there is a striking bathroom (again with black and white floor tiles added), two good size bedrooms and a significantly smaller bedroom, reflective of the time period it was built in.

Elizabeth Whycer, a local photographer, who had lived in the house all her life, inherited it from her parents Boris and June, who bought the family home in 1958 when it cost just £1,800. Elizabeth endeavored to sell the home on ‘eMoov’ last year for £550,000 and according to Homes&Property.co.uk was hoping for an ‘’Art deco enthusiast who could restore it with some period friendly TLC’’ to buy the house. Although charismatic, the old-fashioned property would have needed plenty of renovation to give it a current, fresher appearance.
Interestingly, someone did in fact purchase the property back in July so it’s inclusion at the auction is something of a surprise, maybe this was always the new owners plan or maybe they didn’t realise just how much work would be involved in renovating the property. I’d forgotten about this antique gem until it was brought to my attention that it has now been gutted and is up for auction with Savills for a guide price of £350,000, noticeably less than last year’s asking price whilst the house was still looking homely, but still quite a price tag.
h 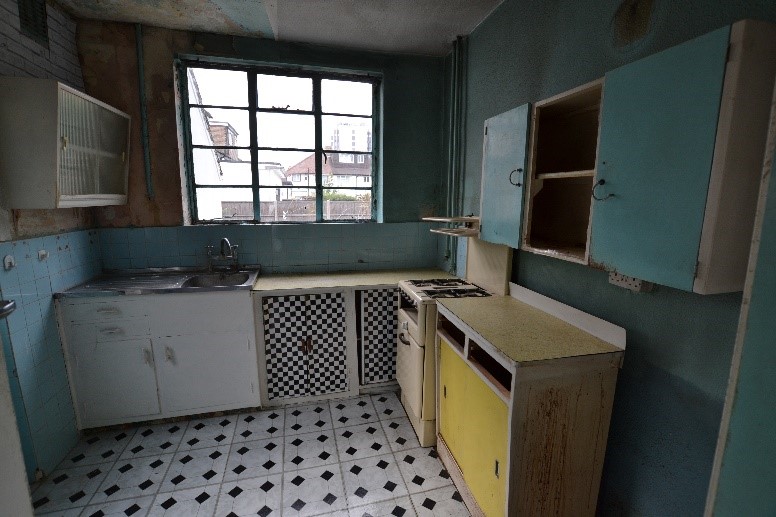 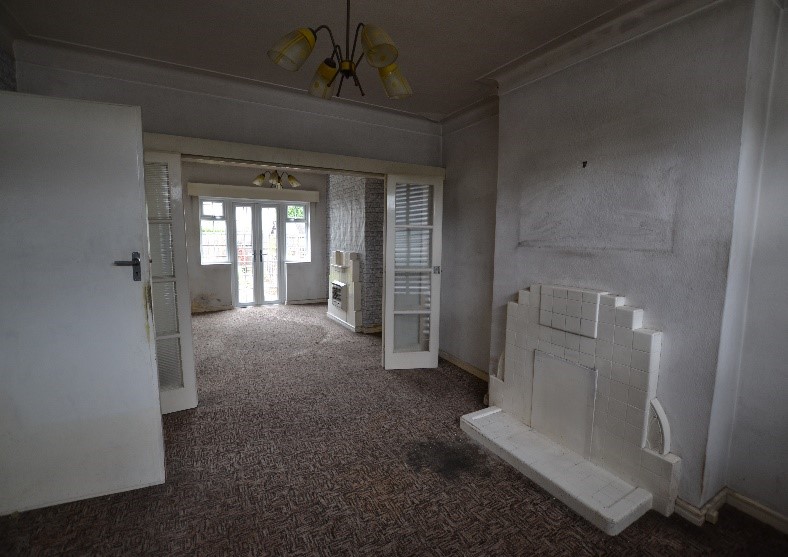 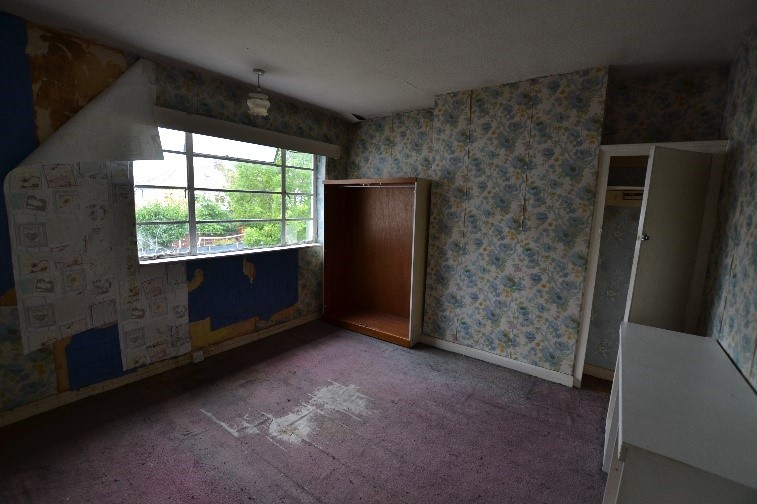 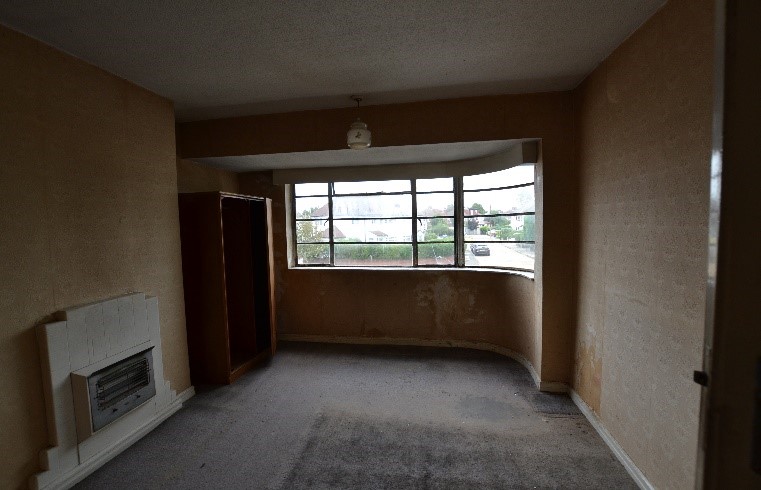 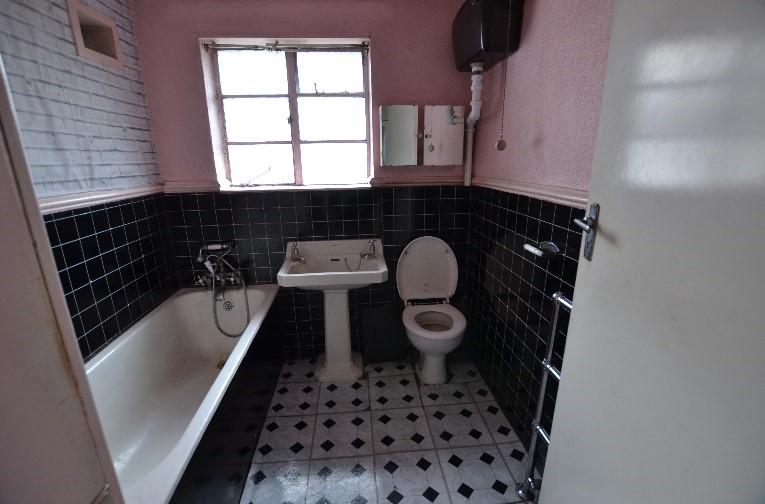 Bathroom
The photos above show the property as it looks now a little bit dull and dejected, which while expected is disappointing to see, when it once held so much character and personality that made it so unique and fascinating. As I stood and looked up at the house last week, rather than seeming pleasant and endearing, sadly the family home looked a shell of its former self.

The front and back gardens are overgrown with weeds, the wallpaper is peeling and there are cracks almost everywhere you look. The house looks worn-out and certainly needs more than just a face-lift to be modernized. Nevertheless, it’s still bursting with potential and the beautiful original features could still be saved and adapted in a more contemporary setting. This property is in need of someone prepared to inject it with a new lease of life. It can still be returned to its former glory, plus some modern, current restorations that fit with this time period, by having someone dedicate their time to rejuvenating this charming little home.

The auction is taking place tomorrow Wednesday 26th September at The Sherraton Grand Hotel, Piccadilly, maybe we'll see you there?