If you'd invested in the Enfield property market 10 years ago, how would your returns have compared to other forms of investment?

But how does that compare to other types of investment?

Most people who have managed to put a little bit of money aside want to make the most of it and will make a decision about how they do that. Often that decision will be influenced by their attitude to risk, higher risks often lead to higher rewards but can also lead to spectacular losses. Tempting for some but not those of us who are risk averse. Similarly, lower risk investments, while sensible don’t often lead to the sort of rewards that dream are made of.

So is there a happy medium? Where should you invest? My best advice is to think about it, do your homework and ask the opinions of people you trust.

As a property professional I’m a little biased but if you compare results from property investment to other forms of investment the difference can be striking.

Let’s imagine that 10 years ago I had £190,000 going spare, the table below shows how that money would have performed depending on how I’d invested it.

However, if I’d bought myself a nice little two-bedroom apartment it would now be worth just under £140,000 more, that’s a capital growth of 73% - amazing again! And, if I’d rented the flat out for the full 10 years it could have increased my overall returns by £293,800, that’s 15.4% annually. As I said I’m biased but that’s pretty impressive, and it looks even better in colour (below). 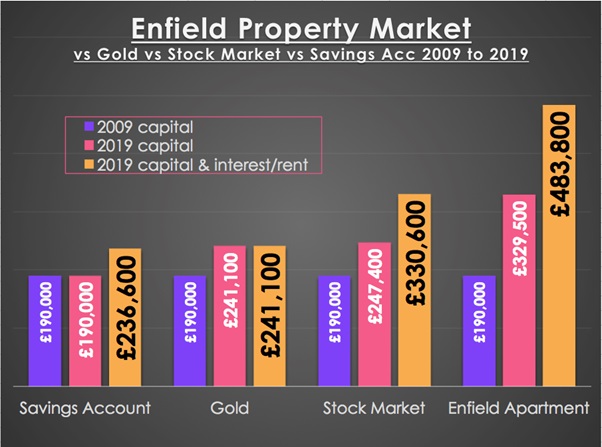 Now, Ok the government are now taking chunks from the profits of buy to let landlords with for example 3% stamp duty, decrease in tax relief and an increase in the rate of capital gains tax, but despite that property is still one of the most constant investments out there. Plus given the housing shortage and the relatively low number if new homes being built, there’s an ongoing need for responsible landlords with decent properties.