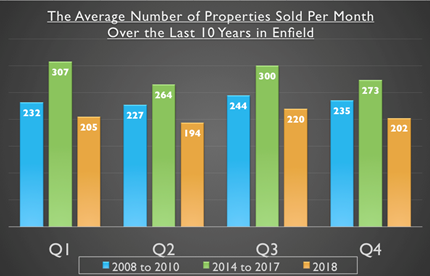 Brexit is playing with the property market so are you more or less likely to find a bargain in Enfield?

Brexit – Can you get a property bargain?

Like many people I dread the B word coming up in conversation but when you work in property, you know it’s going to happen.

‘Are prices dropping?’ and ‘When will the property market crash?’ are two of the more common questions I get asked and many go on to say ‘I’m waiting until it hits rock bottom before I sell’.

So, I wanted to put down my thoughts on what’s happening now and whether a bargain is possible.

Across the UK house price growth has decreased since the referendum in June 2016 and prices have remained stagnant or dipped slightly. If you look at this alongside the number of property transactions you get a good idea of the current market trend.

The chart above shows the average number of properties sold per month, for each quarter in the following years

Is Brexit uncertainty causing buyers to sit on their hands and wait? Absolutely. And while other factors will also be having an impact for example changes to stamp duty and tax relief on mortgage interest on second homes, Brexit is undoubtedly the biggest factor.

So if the demand for property is down can buyers pick up a bargain?

Anyone following the activity on the web portals (Rightmove, Zoopla, On The Market etc) will know that properties seem to be hanging around for longer and prices are being reduced, which would indicate that there are deals to be done.

Indeed 38.7% of properties for sale in Enfield have reduced their asking prices by an average 4.3% in the last 3 months.

At the same time 35.9% of properties on the market in Enfield are advertised either as ‘Sold STC’ or ‘Under Offer’ so it’s likely that some buyers are getting a good deal. However the level of supply vs demand in Enfield is quite balanced which is good news.

In London Prime where ‘Sold STC’ and ‘Under Offer’ properties are just 5.9% of the market, you can see that supply is far in excess of demand, so if your budget will stretch that far I’d say there are real bargains to be had there. In the longer term though wherever you have this level of imbalance of supply vs demand you can be pretty sure that prices will drop.

How to spot a bargain

Make sure you know the area and the market. Have a look at what’s available on the portals (include those Sold STC in the search filters) get a feel for the asking prices, you can narrow this down to the exact postcode or specify a radius. Also look at recent sales in the ‘House Prices’ sections and use the sort option to find those that have sold most recently, again you can narrow this down and type in a street name and radius. Compare and contrast the prices and look at them in date order to spot a trend. Remember, the asking price is just that, an asking price, a guide. You can offer less.

When you’ve found what you think is a bargain go and see it. Then research the seller and sell yourself. By researching the seller I mean asking the sales agent questions such as: ‘Why are the sellers moving?’ ‘How long has it been for sale?’ ‘Has the price has been reduced? Why?’

To sell yourself think from the sellers’ point of view – are you a first time buyer, chain free, cash buyer? These will make you more attractive.

If the seller ‘needs to sell’ rather than ‘wants to sell’, and if you’re ready to go, it could put you in a good position for getting a great deal.

In summary, Brexit or no Brexit, bargains seldom fall in your lap. To get a good deal you need to do your homework and be ready to act when the opportunity arises.