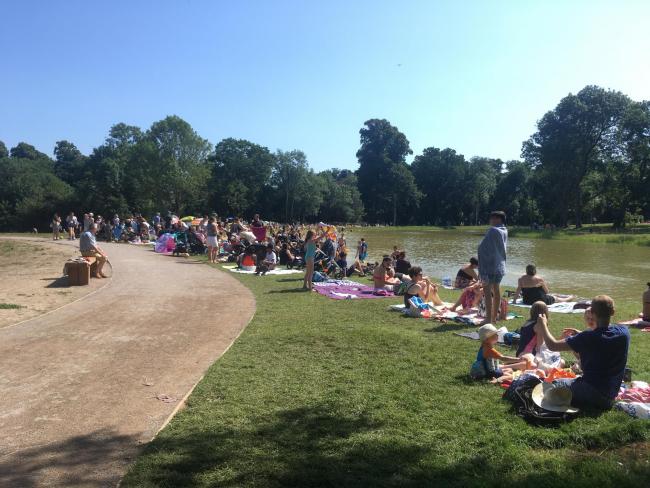 Beckenham Place Park has reopened to the public after several children got into difficulty in the new swimming lake.

Beckenham Place Park has reopened to the public after several children got into difficulty in the new swimming lake.

The park was closed by Lewisham Council on Wednesday after the number of people visiting the lake “exceeded” expectations and temporary fence were installed.

A Lewisham Council spokesman said: “As with any open water facility, we need to ensure people can enjoy themselves safely. This means carefully managing the number of people using the lake and the space around it.

While the park is now open to visitors, the lake remains closed while more safety measures were put in place.

The park was relaunched last weekend after a £6.8 million renovation and has been a huge hit with people testing out the wild swimming lake as temperatures have soared.

However, parents began to raise concerns about lifeguarding around the swimming lake and depth of the water for children after a child was taken to hospital on Monday afternoon.

A dad-of-two from the area named Ben told News Shopper: “If you go to a local leisure centre, children aren’t allowed in the water unsupervised.

“You hear stories in the summer about children and even young men who have drowned.

“Who’s going to take responsibility when there’s another little coffin led out of there?”

Lewisham Council said health and safety of park visitors were “paramount” and rules around lake use were “explicit” on the website.

PTP, which runs lifeguarding and activities at the lake, has offered refunds to people who had pre-booked swimming sessions while it is closed.

Concerned parents have slammed an “unsafe” new swimming lake in Beckenham after a child was rescued from the water on Monday.

The child, believed to be a boy, was taken to hospital with minor injuries after an air ambulance landed in Beckenham Place Park shortly before 4 pm.

A woman who was at the scene but did not want to be named told News Shopper she put a boy who was “breathing, but very quiet” in the recovery position.

Although she did not see what happened, she said the boy was believed to be underwater for 10 seconds before a family member dragged him out.

The lake was unveiled to the public on Saturday

Before she spotted the boy, she rescued two other girls who “panicked” when the water suddenly became incredibly deep.

The lake, which was renovated in the £6.8 million revamp of the park, operates wild swimming sessions supervised by lifeguards at specified times throughout the week.

But according to PTP, which operates lifeguarding at Beckenham Place Park, the lake is closed to the public and does not station lifeguards on Mondays.

A dog walker and concerned parent who gave his name as Ben said he saw “lots of older kids swimming and plenty of people in the lake” on Monday afternoon.

He said: “If you go to a local leisure centre, children aren’t allowed in the water unsupervised.

“You hear stories in the summer about children and even young men who have drowned.

“Who’s going to take responsibility when there’s another little coffin led out of there?”

A spokeswoman for Lewisham Council said the regulations around use of the lake is “explicit” on the PTP website.

She said: “Safety is of paramount importance at the lake. There is clear signage beside the lake stating the opening times and regulations around lake use.

“Lewisham Council compiled a full health and safety assessment which was overseen by professionals.”

She also hit back at reports the lake was left without lifeguards during the opening weekend, insisting staff were on duty during opening hours.

The spokeswoman added parents will be reminded they must keep their children under supervision, particularly outside of opening hours.

According to the PTP website, the minimum age for open water swimming is eight years old, and children must be able to swim 25 metres.